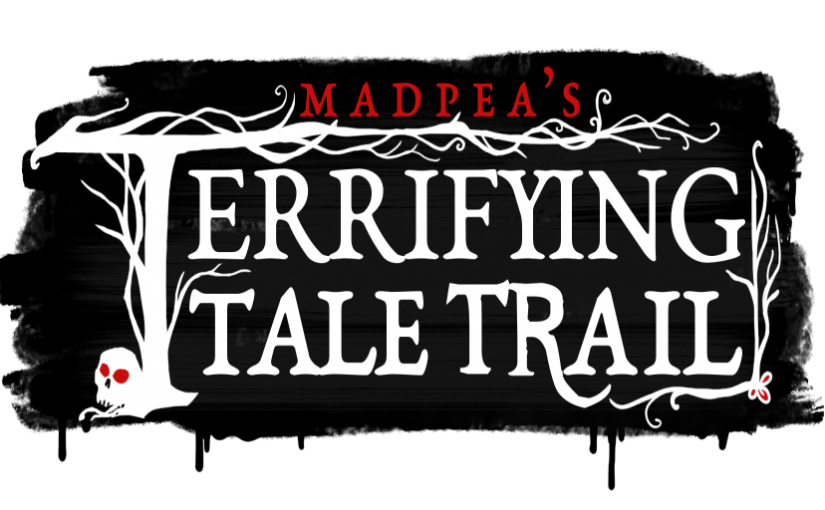 Wilds of Organica will participate in Madpea’s inaugural Terrifying Tail Trail Event, starting TODAY at 12PM SLT, running th ru Nov 2, 11:59AM! Explore the store to find your door to a great wealth of treats!

Our treat on offer is this creaky old treant – an animesh tree that reacts to avatars by proximity or click!

This item will be available exclusively via the event for its duration and for sale afterward.

Get full details on the event and how to get your Hunt HUD by joining the MadPeas group! 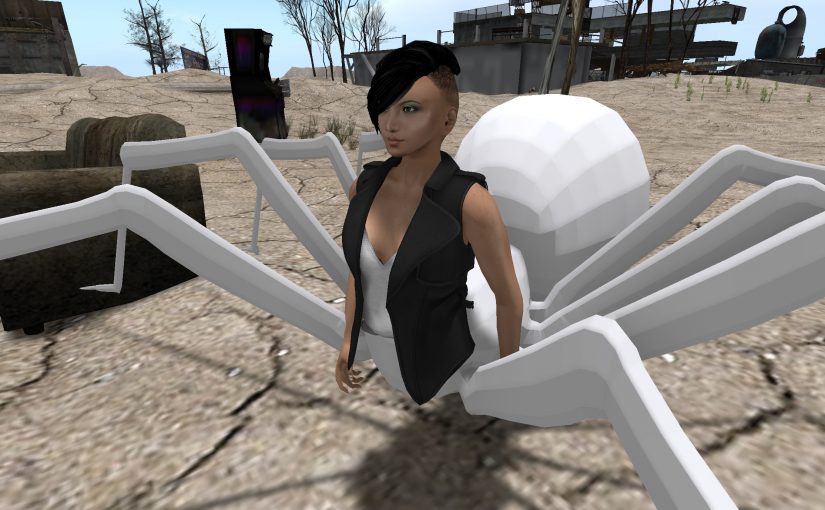 While away on vacation last week, I started thinking about ways in which the new Bento skeleton could be used to make a Drider – human/elf/spider hybrid – possible. As I’ve covered in the past, the Bento skeleton offers a great number of new possibilities, but has some limitations as well when it comes to repurposing some bone chains to be used elsewhere. 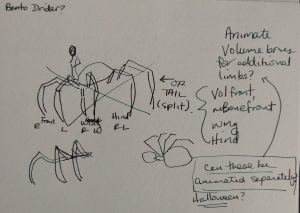 After sketching for a bit, I eventually came to a reasonable compromise that might test well and brought that in to Blender & rigged with Blender Avastar. 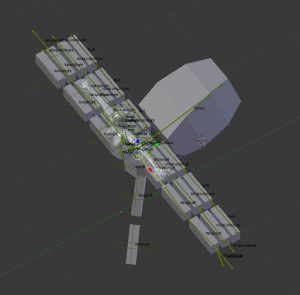 Next, I modelled something a bit more accurate, starting low-poly on just half, mirroring with a modifier (which was kept mostly unapplied until I needed to rig parts that were not standard to the existing Bento skeleton configuration). 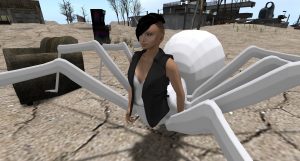 I elected to use both the wings and hind legs to articulate pairs of legs here, but also chose to split up the tail (6 bones >> 3 bones per leg) to rig the last pair of legs. This means one less joint articulated in that pair, but beggars can’t be choosers. 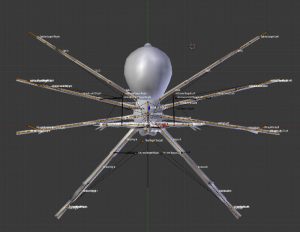 Of note: While it’s true you can’t ‘unparent’ bones within the SL skeleton to avoid animation issues involving bone hierarchy, you can to some degree modify Avastar’s control rig – you can turn off constraints, you can parent them to other control bones, you can even direct certain limbs to target newly introduced IK target bones. Avastar is even now sufficiently tolerant to take these non-standard target bones in to account when it comes time to export animations for use in Second Life.

In my case, Tail 4 thru 6 are no longer connected or inherit rotations from Tail 3. I also added two new pairs of IK targets to direct movement for leg pairs 2 & 4.

After a lot of jiggerypokery concerning knee IK targets (which I decided to do away with ultimately), I was able to get a mostly usable rig going.

A few notes on animations: I had to tinker with frame speed a bit to make the walk work well without ‘sliding’. Tapple Gao makes an excellent (and free) ‘Test Treadmill’ that helps to diagnose speed issues such as these. Also, more often than not, with avatars that use wonky rigs, you will need to export with bone translations. Under other circumstances it’s ideal not to, particularly if the intent is for the animation to have reuse with some other similar avatar; unfortunately when tinkering with rigs where bones have been parented in non-traditional ways, you MUST tell the SL rig to move those bones to (X) location, since they would otherwise just inherit their parents’ transformations.

As of this week, I have a basic walk, stand, fly & jump complete and look forward to getting more done soon. I’ve also been able to unwrap the mesh to create my  UV layout, which is spread out across two layouts. This has allowed me to create additional textural details across diffuse, normal and specular maps that really create a greater sense of detail without adding significantly to the cost in geometry.

Further down the road, I hope to add some geometry to add the option for hair textures on the legs and body. I’ll also need to work on LOD optimization, additional animations and documentation overall.

Do you enjoy keeping up with my posts but find that my products are not quite for you? You can support my content creation in SL and other virtual worlds by becoming a patron on Patreon. Along with keeping up with new releases, you can keep up with personal and work project writeups, see sneak-peeks of upcoming content,  be informed once new videos are up, access to Patreon-exclusive content, giveaways and more! Check out my Patreon page, here: (link) 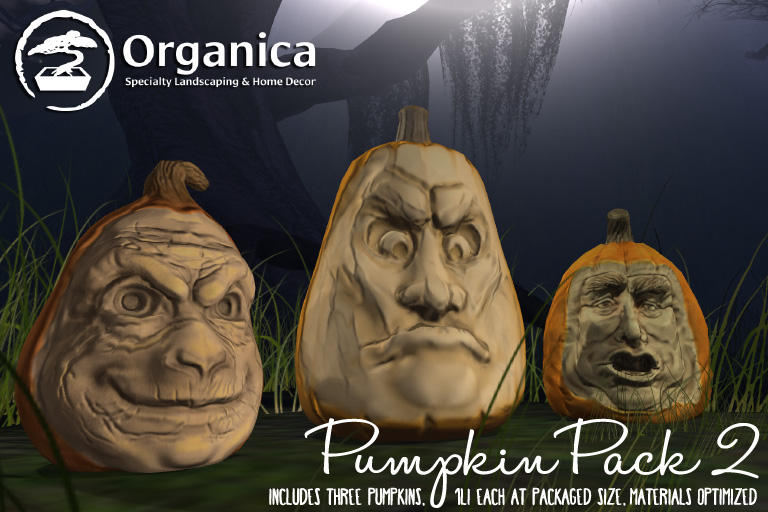 Fresh out today for The Neighbourhood are these three new pumpkins! Snap ’em up at L$150 for a limited time this weekend over here: http://maps.secondlife.com/secondlife/Organica/51/111/50

Various other Halloween-y things are back on display for a limited time and I’ll be adding to them, time permitting, this month, so keep your eyes open for more soon! 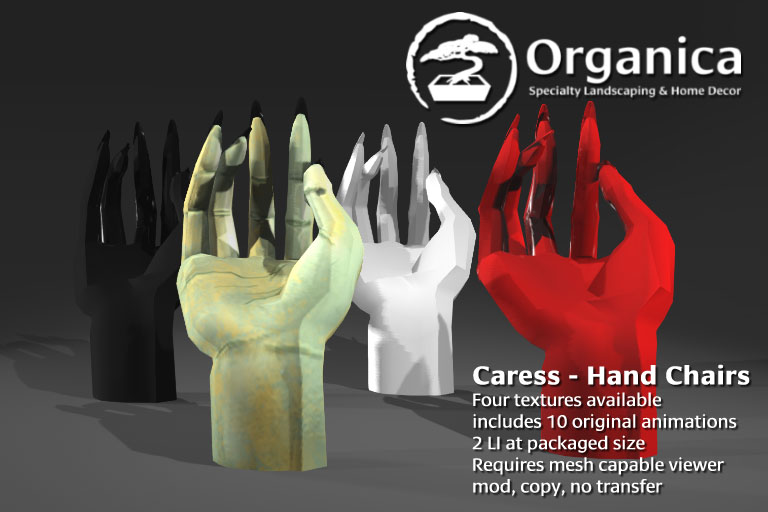 This week at The Nest, you have a chance to pick up these four hand chairs for free! Just explore The Nest sim and click on the orange sign just outside Organica’s door, here, for information!

The hunt runs from Oct 6 to 15 2013, after which these chairs will be available at both the main store and location at The Nest, as well as on the Marketplace, as a pack of four. 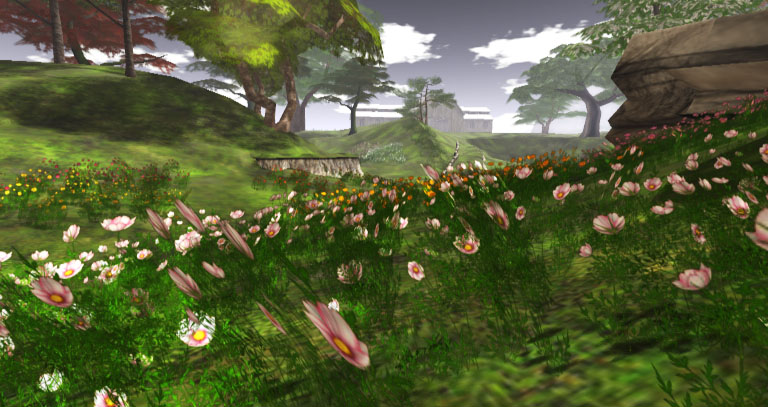 As we draw closer to Halloween, there’s one more themed release for your interest, along with some new ground-cover! 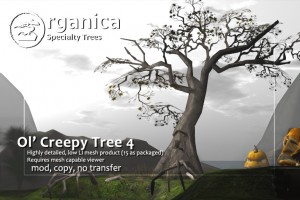 Newest in a line of suspiciously characteristic trees comes Ol’ Creepy Tree #4. This highly detailed new tree features both hand-painted textures and baked lighting. It also comes in two parts (the main tree and the roots) linked together, so you can adjust the two parts to fit your land easier. 15 LI as packaged, mod, copy, no transfer. Available in store or on the Marketplace here. 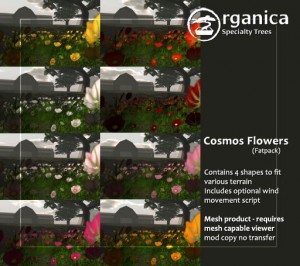 These new flowers are sure to freshen up your garden! Available in 8 varieties, both separate and as a fatpack, they are mesh and come with 4 shapes to fit various terrain. An option wind movement script is also included – just drop it in to the object and remove if you wish – it will set texture animation parameters (which doesn’t require an active script to run once it’s all set up). 1 LI as packaged, mod, copy, no transfer. Available in-store or on the Marketplace. 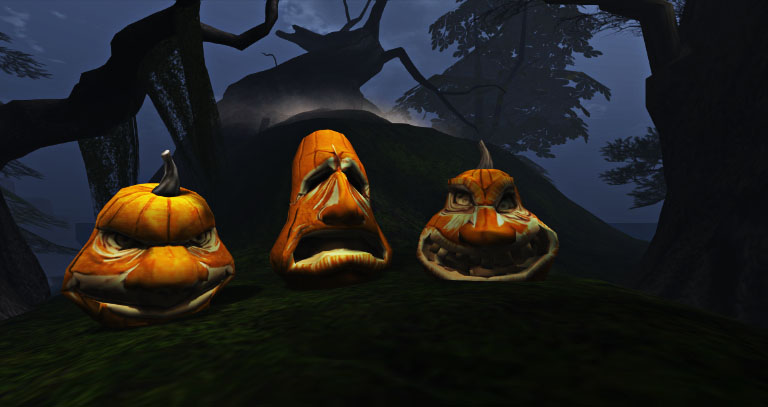 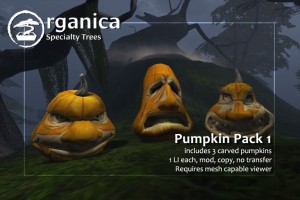 The first halloween release this year from Organica comes in the form of three new pumpkins, all available as part of Pumpkin pack 1! These highly detailed pumpkins are sure to be a welcome addition to any festive halloween display! Each is 1 LI at packaged size and is mod, copy, no copy. Available in-store or on the Marketplace!

Some of you have been asking about some of the newer assets that have been used in Organica sim lately; namely the dirt roads as well as the waterside erosion pieces. 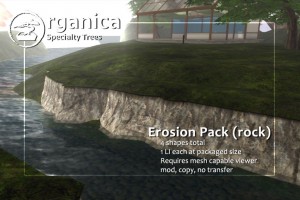 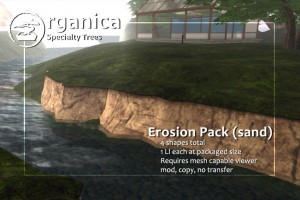 These two packs include four shapes to mix & match and place up against the edge of your land, typically between water and land but also usable as wall pieces if you wish. Each piece is 1 LI at packaged size and all are mod, copy, no transfer. Replace upper texture with your preferred terrain texture if necessary. Available in-store or on the Marketplace (rock) (sand)! 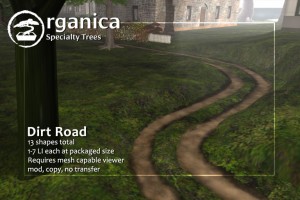 This dirt road package includes 13 tile shapes in total to best accommodate your terrain shape. Pieces range from 1-7 LI at packaged size and all are mod, copy, no transfer. Available in-store or on the Marketplace! 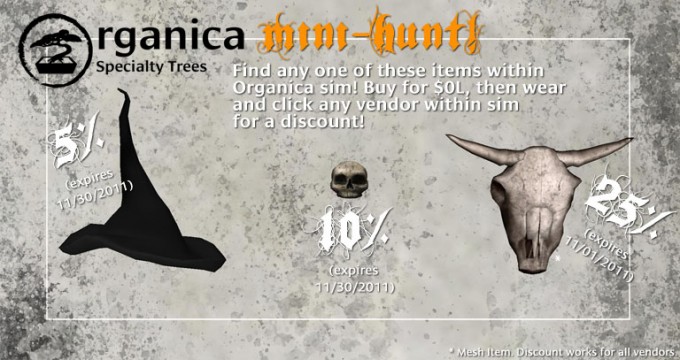 For a very limited time, three items (seen in the above image) will be scattered throughout Organica sim. They are each discount items, which means you can wear them like discount cards and Right-click> Select ‘Card’ to redeem their rewards.

The longhorn skull’s discount expires on November 1, 2011, so that item can no longer be found after that date. The discount on the other two items expire at the end of November 2011. Discounts cannot be combined – if multiple discount objects are worn simultaneously, you will get the lowest discount.

If you purchased items from the store today, find one of these items and send me a snapshot of you holding or wearing it; I’ll go through and refund you the percent discount granted by that item!

On an unrelated tangent, I’m also releasing some new Rose Gates while I have a chance! 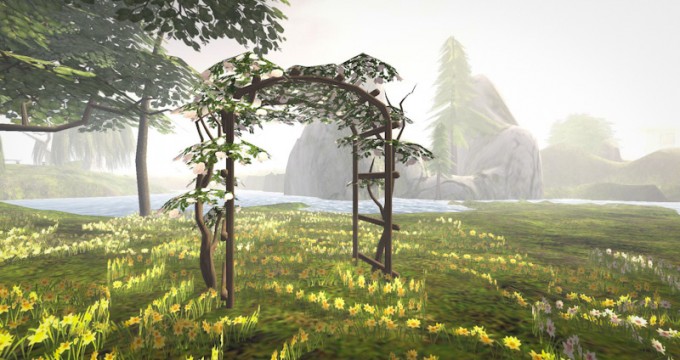 These Rose Gates are available in eight colours and are only 4 prims each! They are made from oblong sculpts, so make sure you have at least viewer 1.21 or newer to view.  Available individually as well as in a fatpack. ( Buy in Store ) ( Marketplace link forthcoming )

1) Wooden Fences: After many requests for the preliminary wooden fence I put up around the orchard area, I have backed up that release with a full fence pack, which features 7 fence types, each between 2-3 prims per section. This product is only available mod/copy due to the necessity for multiple sections to complete a full fence. Most come with seperate second posts which should be unlinked from the section prior to duplication.
2) Bristlecone Pine: This Bristlecone pine is the first in a series I hope to produce. It features entirely original coniferous foliage and custom trunk texturing, oblong and square sculpts, and is 8 prims total. Available mod/copy/no trans as well as mod/no copy/trans.
3) Creepy Trees: It’s about that time of the year again! As October closes in on us, inevitably the Halloween decorations come out. Have a look at these new trees near the Hollow tree, just to the right of the store landing point! They vary from 7-15 prims each and are available mod/copy.
4) Thick and Twisted Ficus: This new (huge!) ficus comes in two shapes – some folks may prefer the straight and upright version, and some folks may prefer the twisted version that comes with it. (Twisted version shown, straight version on site). 9 prims each. Please note: each requires about a 60m by 60m footprint. Available mod/copy.
5) Spring and Dried Wheat: These two varieties of wheat are now available for those who’d like their own field of wheat. Available in spring green and dried editions, they take up as low as 1 prim each, with 4 different shapes to best suit your landscaping needs. Available mod/copy only.

There will be a L$1000 prize each for best lady and gent in costume! Since this gives you a few days to plan, you have fair warning!

Come on over, bring your friends, and be prepared for a night of fantastic music, dancing and good times in an immersive atmosphere!

IM Aki Shichiroji for a direct TP or use this LM at your leisure:

We look forward to seeing you there!