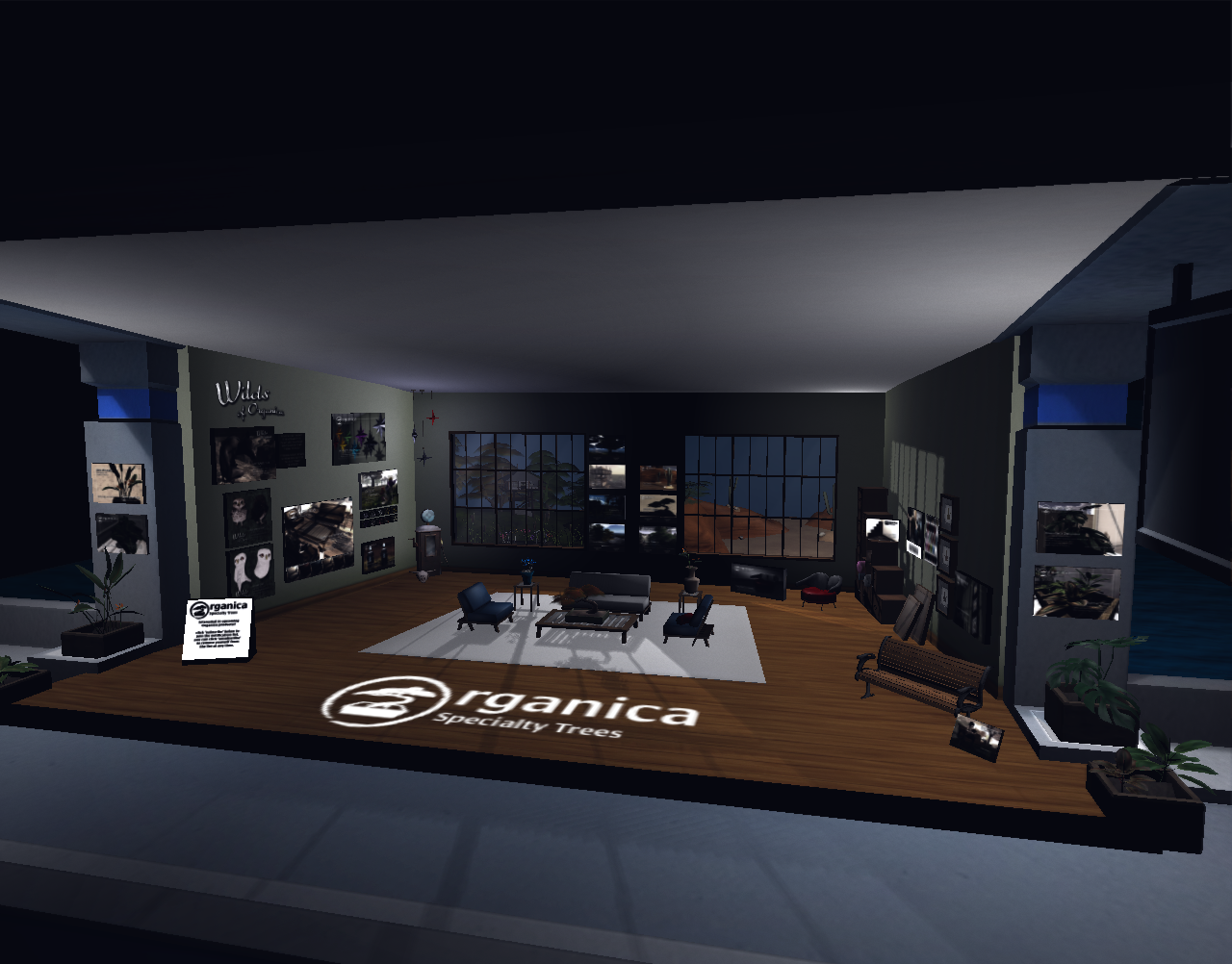 I’ve finally had a chance to finish up my booth and look forward to exhibiting my work!

Some new items have been released, along with a MMM12 exclusive, a freebie and some discounts too!

Details are as follows: 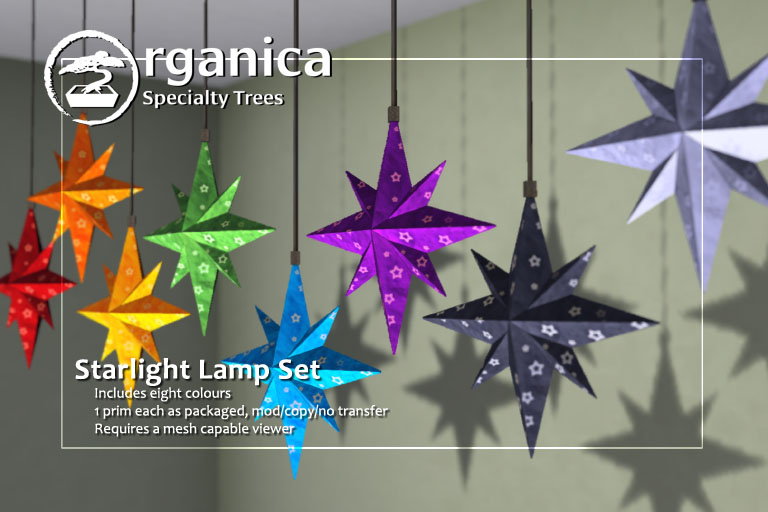 These trendy star-shaped lamps come in eight colours, all in one set. Click to toggle through on, off or natural daylight. 1 LI each as packaged, mod/copy/no transfer. ( Buy at MMM12 ) 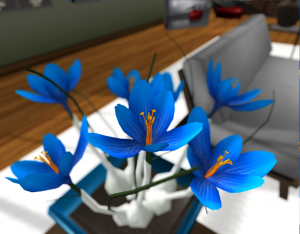 Exclusive to March Mesh Madness, these white-veined blue crocus flowers are offered as part of a potted setting but also include all three crocus flower shapes inside. This colour will only ever be offered at MMM12, so if you like it, this will be your only chance to pick it up. 1 LI per flower, total setting comes to 9 LI. mod/copy/no transfer. Available only at MMM12! 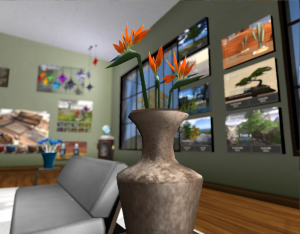 Some items have been marked 33% off, again at MMM12 only.

With the exception of the MMM12 Crocus, all items released above will be available in-store at Organica or on Marketplace about a week from now. In the mean time, help make the March Mesh Madness event a success by dropping by, bringing your friends, or just in general passing the word around about the show.

Updates have been sent for both the Burrowing Owl and Snowy Owl avatars, fixing the top level sit button, preventing the av from getting pushed underground when the ‘birdsit’ button is pressed. The eyelid texture for the snowy owls has also been fixed and should appear black, not brown. If you did not recieve the update, please let me know and I’ll look in to redelivery.

I’ve had some requests for more compact and upright trees that are more suitable to both urban and rural areas. Coupled with the desire to put out some more autumnal offerings, the results are as follows! 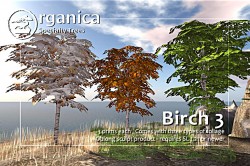 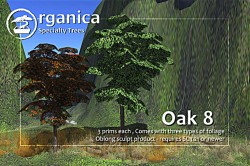 Both trees are low prim at 3 prims each. They come with three foliage textures, both scripted and unscripted, mod copy and mod transfer.

As always, they can be found at Organica sim.

Mod/Copy editions can also be found on the Marketplace as follows:

The Land News:
Six new parcels of land have been made available this month in Sylvan sim. If you have always wanted a spot in this quiet sim, now’s your chance. There are three parcels left, in the north-east corner of the sim and all parcels in Sylvan now have a 1.75x prim bonus, which means you can have 75% more prims on your parcel than you would normally.

The details are as follows: 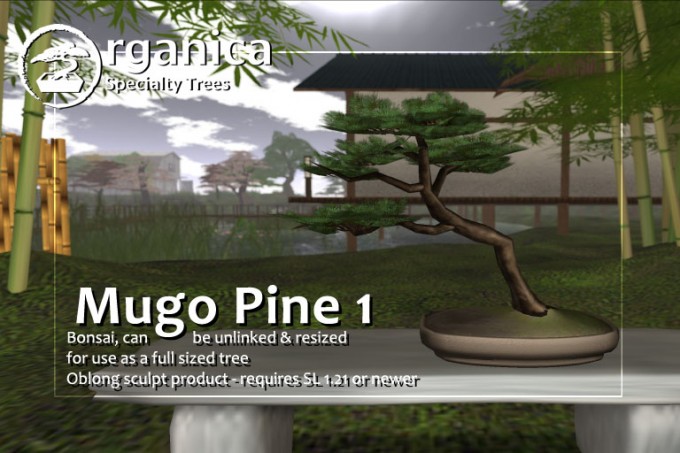 This new bonsai is offered both mod/no copy/transferrable and mod/copy/no transfer and takes up only three prims! If you so choose, the tree can also be unlinked from the pot and resized for use as a full sized tree. It’s perfect for any Asian style garden. ( Marketplace Link ) 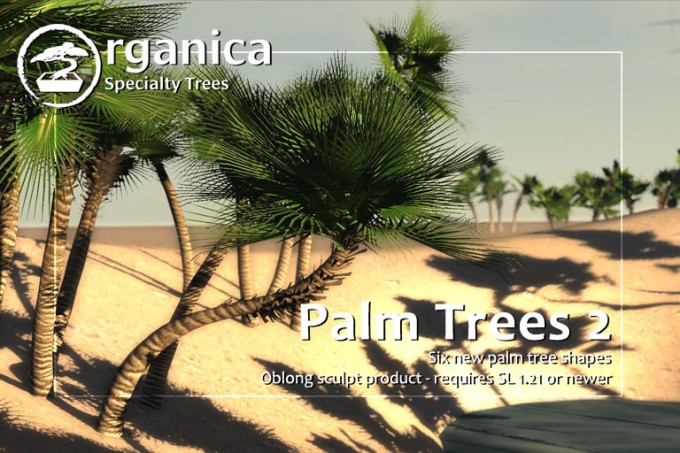 These fan-style palms are available mod/no copy/transferrable and mod/copy/no transfer. The pack contains six palm tree shapes and new realistic foliage. Prim counts range from 4 (for single trees) to 9 (for clusters of four).These are a great compliment to your tropical or desert garden. ( Marketplace Link ) 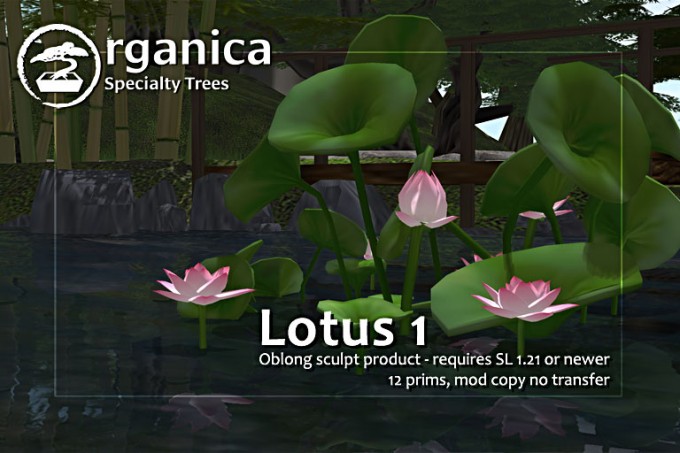 As usual, everything can be found both on the grounds and in the store at Organica sim:  http://slurl.com/secondlife/Organica/127/138/24

Organica will again have a display at this year’s Home and Garden Expo!

As usual, items that were originally RFL fundraisers are being offered again as fundraisers, so things like the Bougainvillea Gate & Tsukubai will raise funds for the American Cancer Society for the duration of Relay for Life. Additionally, RFL exclusive items will make an appearance/reappearance for the fundraiser; the RFL Pink tulips are back and two new RFL exclusives will debut at the Expo, then make their way to the main store when the Expo closes on May 23. 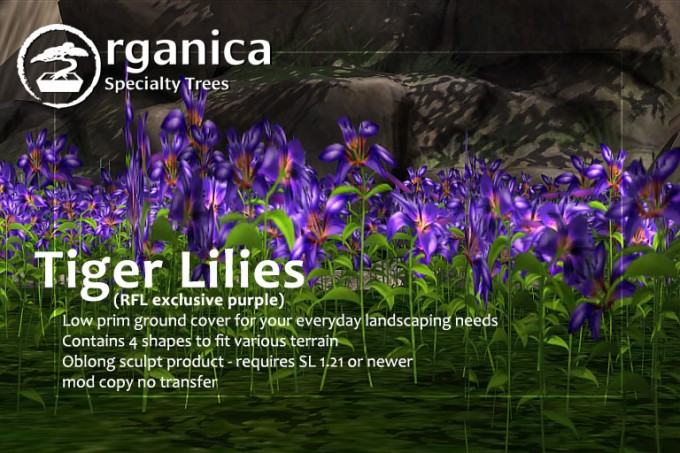 Like the other lilies released earlier this past month, these RFL exclusive purple tiger lilies are low prim, come in 4 shapes to fit various terrain, and are mod/copy/no transfer. 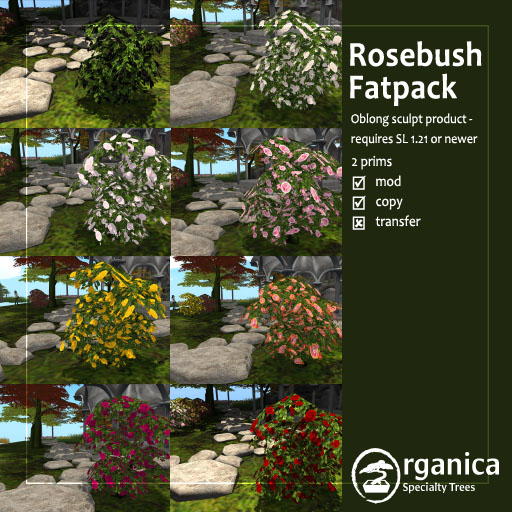 New roses are now available! Ranging from white through red to black, these bushes are low prim and look great! Offered separately or as a fatpack, mod, copy no transfer. 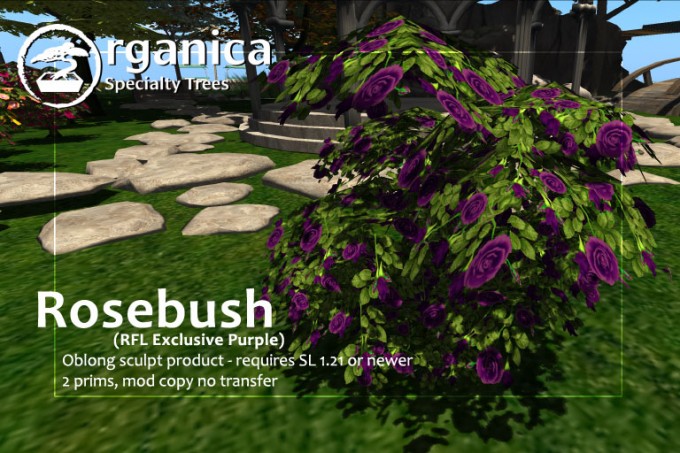 Many, many moons ago (almost two years!), my friend Todd Action asked for a big tree with a tire swing on it. I didn’t think much about it then, but over time I came around to the idea and how to execute it. I’ve also had a chance to play around with JJacek Antonelli’s Blender .bvh exporter, so I was ultimately able to put together something to my liking that meets the standards I try to keep today. 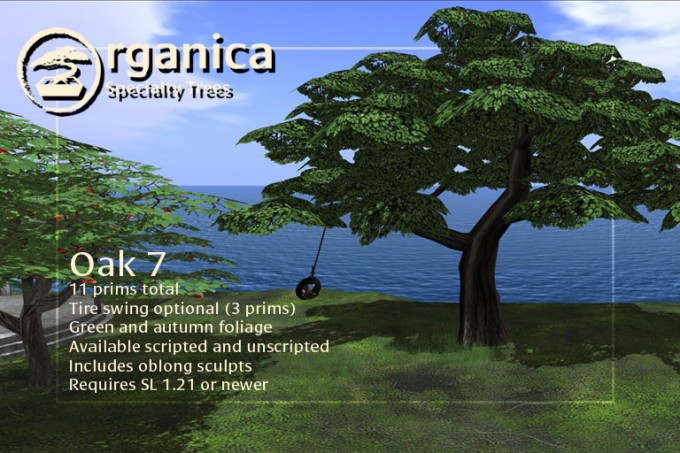 The result is a 11 prim Oak Tree (3 prims make up the optional tire swing) that is offered with both scripted and unscripted versions (for foliage change) as well as a rez-faux version which uses a scripted tree and swing. Sit on the tire swing to swing – three animations are included and can be switched through clicking the tire while seated. Due to the nature of the scripts and packages included with this product, it is being offered mod/copy only (scripts inside are copy only).

The tree’s available in the store as usual or on site here. 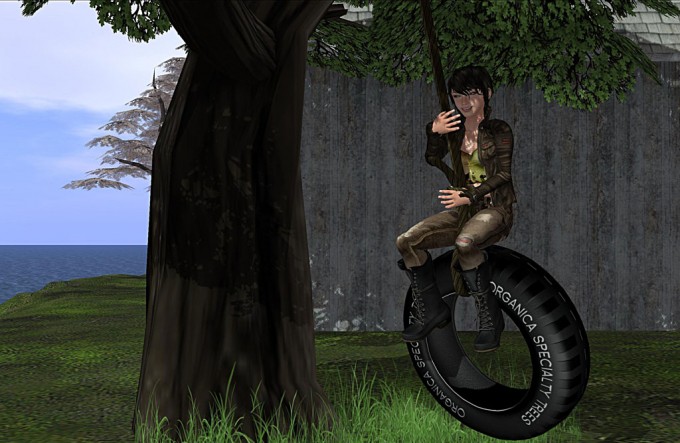 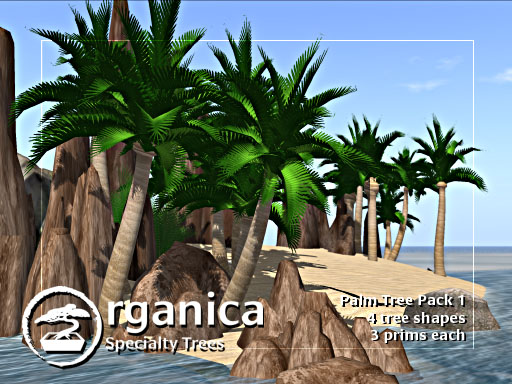 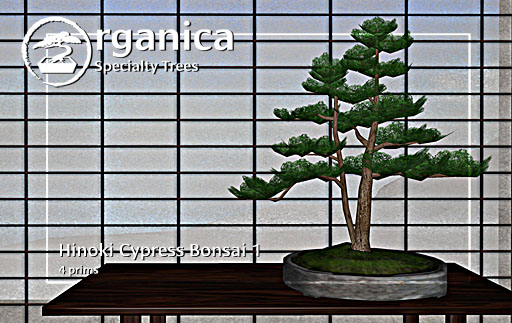 I’m also pleased to announce a new addition to the bonsai collection, with this Hinoki Cypress bonsai.

Both are offered both mod copy and mod transfer.

As always, these new items are available at the Organica main store: http://slurl.com/secondlife/Organica/127/138/24 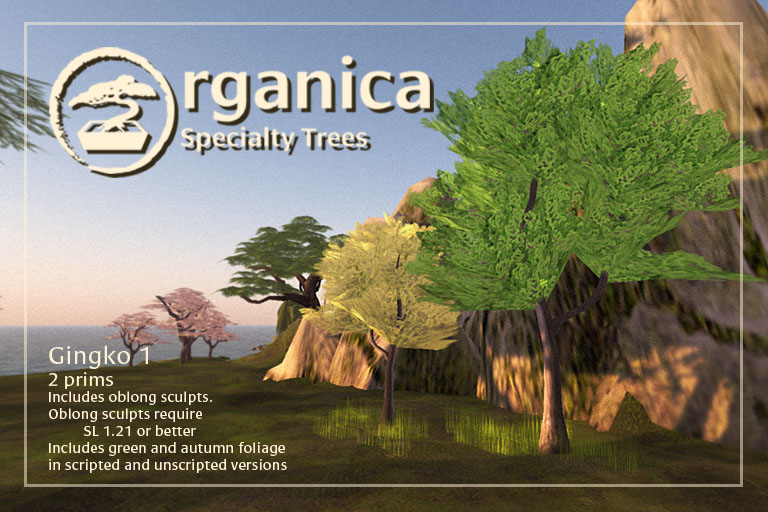 Known as ‘living fossils’, Gingko trees date back to the Permian geologic period and have persisted with minimal genetic changes ever since.  These deciduous trees can be found throughout the Northern and Southern hemispheres and are associated with Asian cuisine and memory-related herbal remedies.

This new tree set comes in two foliage flavours – green and autumn. Each tree is two prims and the set comes with an optional scripted tree. As always, available mod/copy and mod/transfer.

Organica celebrates its official opening this afternoon from 4-6PM SLT with some great tunage, prizes and discounts for today only!

Join us in Organica Sim for your chance at some pretty valuable gift vouchers,

The sim is presented in two parts that will combine what regular visitors will be used to based on the previous store set-ups both in Sylvan and abroad:

First, much of the sim is devoted to displaying new stock. Visitors are free to explore the ground level areas and will find vendors for stock on display next to most items.

Visitors will additionally be able to browse vendor boxes for most stock within the Japanese styled building just west of the store landing point.

Out with the old

Sort of. Some of you will have received updates for your products earlier this week or may be receiving further updates soon.  Many items were updated to use more efficient foliage and rather than making you buy new ones, they were passed out to existing customers on record.  If you have one of the following items and haven’t yet received an update, please pass me a notecard with your transaction number or a screenshot of the edit menu that comes up when you edit your tree and sit tight – I do have records, but they are plentiful, very old, and archived. Since I am also in the middle of organizing events for today, there may also be some delay in my getting back to you right away.

Some items have been withheld from sale and are on hold pending update or retirement. If you don’t see something you were looking for, please ask.

There are other items that are being retired from display entirely due to age and lack of space.  These items will be found in the store on the right-hand side at permanently discounted prices. They may at some point be retired from sale entirely, though such will be announced specifically at some later point on the blog or through notecard.

In with the New 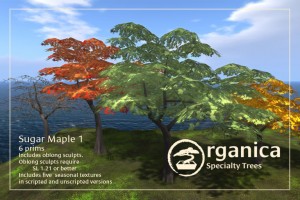 This package of young sugar maple trees includes five different seasonal foliages – Spring, two Autumn shades, Winter and Lit.  A first for Organica also is texture change scripts (which were also included with the Trident Maple 2 update) which are available as a seperate single tree in the package for those who wish to use them. 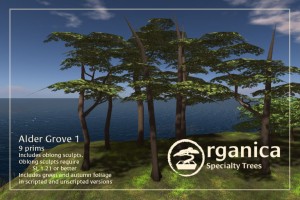 These trees are available in three sizes and are great as broad forest items. They include both spring and autumn foliage, scripted and unscripted. 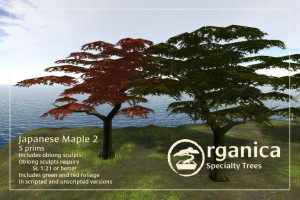 A taller, fuller edition to the Japanese Maple series, this tree reflects the lush and humid nature of the natural environment Japanese Maples hail from.  This tree is again available in green and red foliage, along with a scripted edition which can switch between the two. 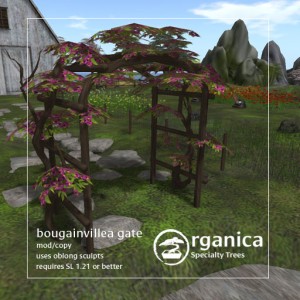 This is an arched trellis covered in bougainvillea vines and will be the first of Organica’s contributions to this year’s Relay for Life campaign for the American Cancer Society.

On Scripted Trees
I have long debated about the use of scripts to control tree textures since folks have a tendency to use so many trees at a time. Particularly in light of the lower prim offerings many tree stores offer today, the potential for increased lag server side is certainly there.  I’m not going to say the scripted trees I have begun offering are ‘lag free’, since no scripted object can ever claim that no matter how many times those words are bandied about in all-caps.

With that said, the scripts in each tree presented thus far have been found to average 0.03ms each, which is quite reasonable on a sim that is performing properly.  For those who are a bit more script conscious, non-scripted editions will always be provided for every foliage texture used in the scripted edition.

I’ve finally put together the bulk of my both at the Fantasy Faire!  You can find Kitheres in the Avatopia sim, just to the right of the path when you arrive, facing directly east.  (Or you can use this handy SLURL:  http://slurl.com/secondlife/Avatopia/209/118/22)

There are quite a number of new releases this time around.  I’ve been using the last few weeks to put together two new outfits, Hera and Breanne (pics lower in this post), as well as a bunch of new eyes, releasing some sculpted ears that were made to work with the Delvian skins, and putting together some goodies as RFL donation gifts and freebies.

All of the new stuff will ONLY be available at the Fantasy Faire, which runs from June 15-21.  Afterwards, I guess I will have to figure out more space for the new goodies 😛

In any case, I am offering three donation gifts for RFL this go ’round:

Fantasy Faire is a 9 sim affair and sure to be busy all week!  When you decide to visit, please make sure you take off any unnecessary scripted items.  Primming down as far as you can will also go a long way to making your faire-going experience smoother.

For more info about other vendors at the show, check out the FFC’s Fantasy Faire blog, here:  http://fantasyfaire2009.wordpress.com

Quite a bit of space was added to the main store today in preparation for future releases. I’ve also been shuffling things around and probably will continue to do so until the store seems a little more organized to me.  If you miss something in the meantime though, let me know, and I’ll be glad to point you in the right direction.

With that said, I’d like to share with you the latest release, which has been a long time coming, since they were suggested to me back in December. 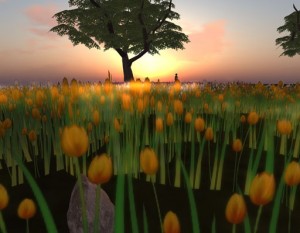 Yes, tulips are now available at Organica, just in time for Spring!  Eight colour/varieties are available at this time, as seperates or as one big fatpack of everything.  As per usual, they are mod/copy.

By request, the small pond that houses the cattails at the store has also been set for sale, mod/copy.

More stuff coming later this or next week.