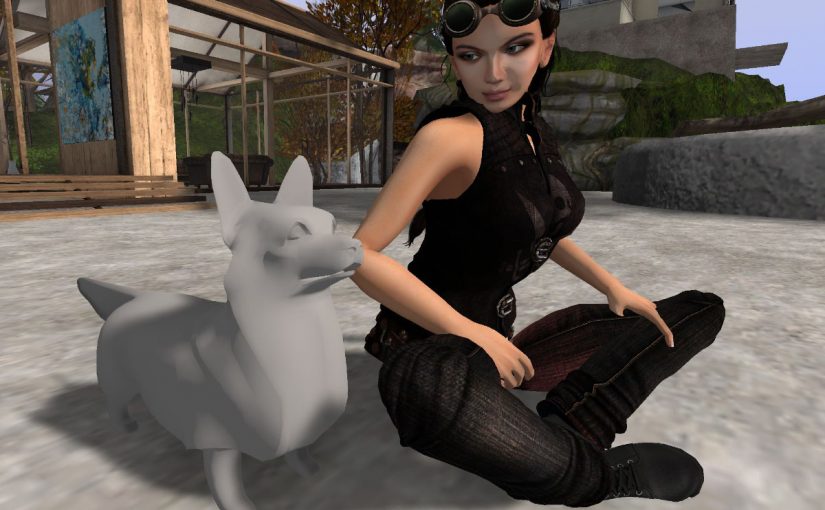 This week I figured I’d get started on some Wilds of Organica-related items, since the last couple weeks have been pretty landscaping and decor-heavy.

Linden Lab have taken the past few weeks off, as far as Content Creation user group meetings – they will resume tomorrow (Feb 15, 2018) at 1PM SLT, on Animesh 1 region (on ADITI grid).

It’s hard to gauge how much longer the testing period will take. When we last met, it seemed like development was ongoing, but felt like we were moving a bit closer toward final performance and animesh limits testing. There has been some push in terms of increasing the triangle limit, however I’m still of the opinion that 50K is far more than enough.

With that said, I’ve begun development on a new WoO product this week that would likely see use as either an avatar, animesh, or both. We’ll see how development goes moving forward – I’m excited to see just how well it can be implemented, given the positive experience I’ve had popping in animations and some basic scripts for existing content thus far.

When I’ve chosen a real-world subject, typically I’ll look up some basic reference material to get the proportions down. In this case, it’s mostly been looking up corgis on Google Image search. It’s easy to get caught up researching cute critters and your search results are likely to be the same as mine, so suffice it to say that I use such references as a touchstone to develop an idea of what age and proportion I want my avatar to be.

My preference, from a stylistic point of view, is to avoid being photorealistic in my translation of a real dog to SL dog. I don’t really enjoy the uncanny-valley look that often comes from taking references completely from photograph to projected final texture, so usually these references become proportional and very general references later on when I paint my fur textures manually.

In this case, I was going for non-puppy, but still on the young side, just to get a nice balance between lovable huge ears and adorable elongated & lowered carriage. I’ve also elected to go the non-docked route, although a bobtail option might be in the cards at some point.

The early hours of my avatar making process usually start with something very simple – like a box with some very simple extruded faces, to block out limbs, head, etc. Once I feel i have the main proportions down, I will usually toss on a few modifiers to help me get a clear idea of what the final product will look like, even if i might not apply all of these modifiers by the end of the project. 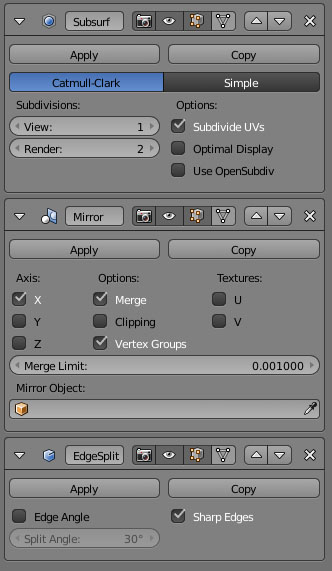 By using a SubSurf modifier, I can non-destructively visualize how my geometry might look if i were to subdivide and smooth. I don’t typically ever apply this modifier permanently because it’s too easy to just apply it and call it a day, without addressing some of the geometry problems that it introduces. 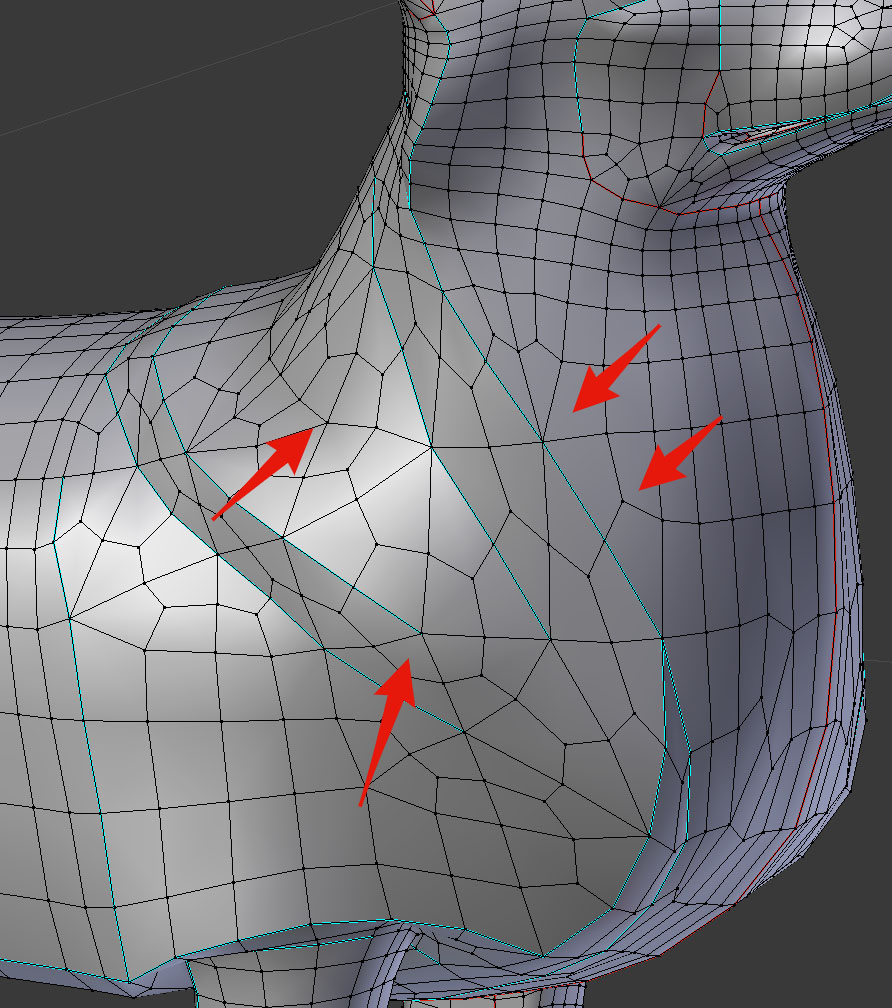 In particular, SubSurf tends to cause geometry to form vertices which either branch off in three or five directions, which is not ideal from an edge-flow perspective.  Also, it’s typically a lot more efficient to add edge loops and rings in areas where necessary, as opposed to allowing a modifier to add them all over your model.

I tend to add some edge loops and rings to some degree at this stage, to get the basic silhouette established, but do tend to add more later on, during the rigging stage, for added flexibility and attention to specific bone weights. One might conceivably use the ‘simple’ subdivision method rather than Catmull-Clark, however that subdivision method will not apply any vertex to vertex smoothing calculation and, at least for this use case, does little to add to this workflow.

I will typically mix the SubSurf modifier along with a Mirror and EdgeSplit modifier.

The Mirror modifier allows me to model on one side-only and have those changes propagate symmetrically.

I usually add an EdgeSplit modifier to help visualize the edge-flow of my model – in this case to help define key features in the surface as well as to give some definition to the fur.

This helps to give the mesh a more distinct silhouette and to give me a better idea of how the geometry will need to be broken down later from the standpoint of someone who needs to rig and animate. As with the SubSurf modifier, unless I actually need a very sharp edge in my final model, I usually don’t permanently apply this modifier permanently either, since the resulting edge-splits will cause duplicate vertices that are not always necessary.

Below, you can see the difference between my Mirrored model (with no other modifiers added, but faces rendered as smooth), my mirrored model with edge-split, and finally with SubSurface divisions. 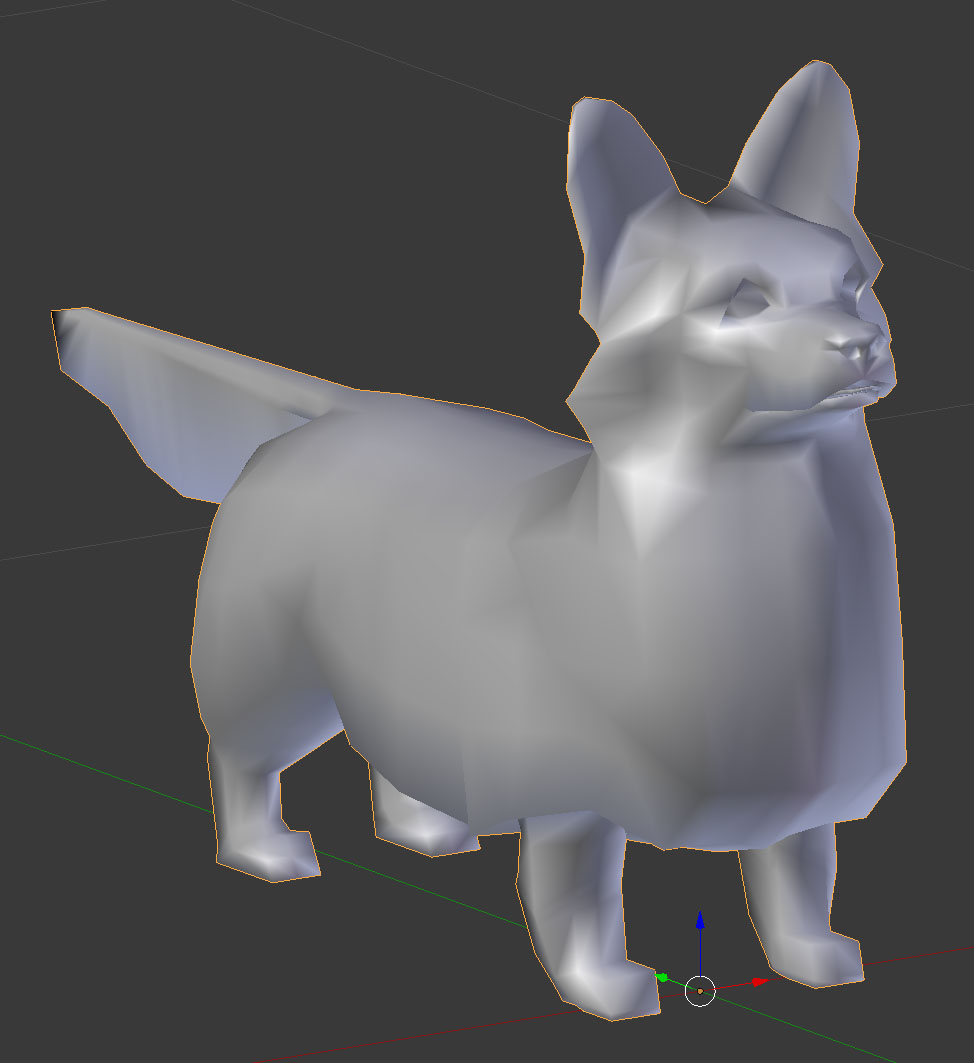 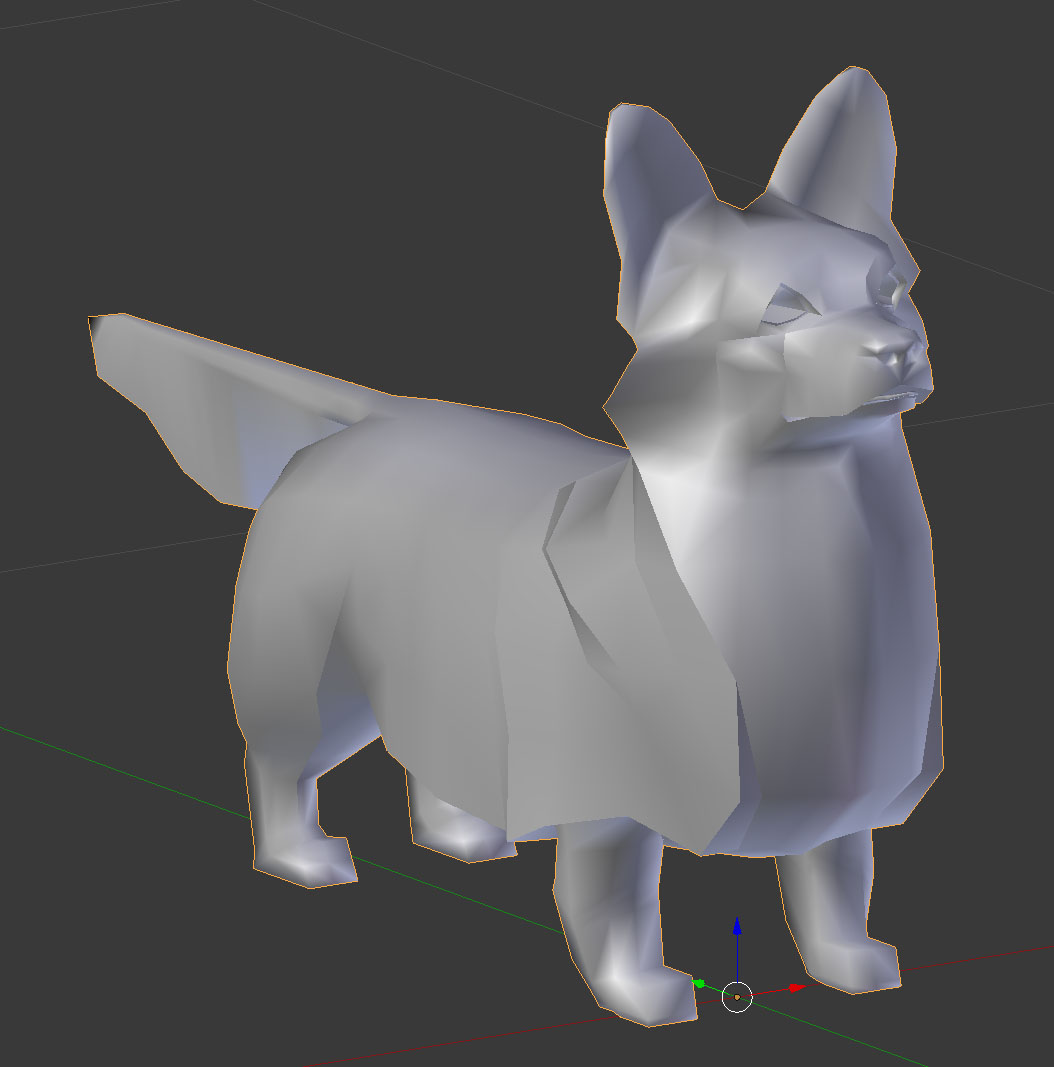 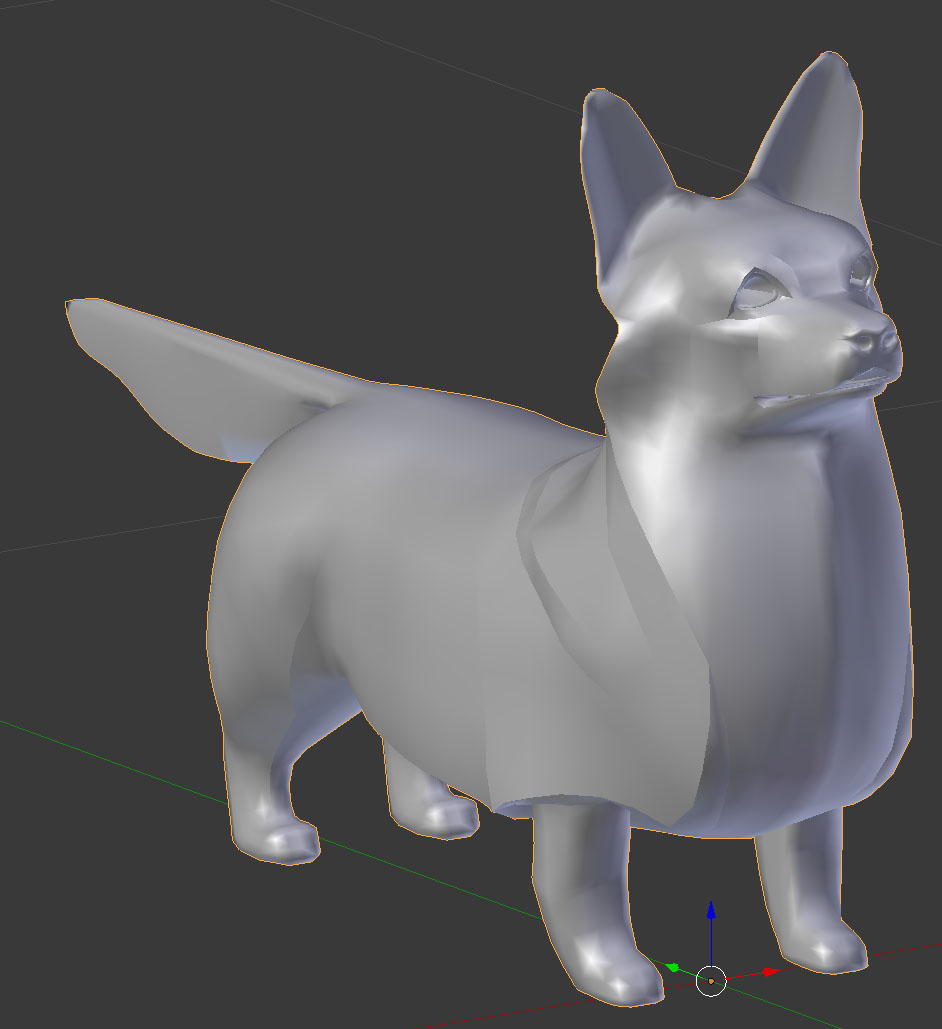 Once I am happy with this edgeflow and overall shape, I will usually begin modifying the Avastar Extended Bento skeleton to fit the avatar.

We’ll cover this, along with rigging our corgi, next week.

If you like what you see but don’t think it’s quite right for you, perhaps consider donating to my Patreon? Your continued support helps to produce weekly content (written, modelled, animated or otherwise) and helps to keep original content creation in Second Life!

Today, I’m glad to announce that the Kitten avatars are undergoing a long-awaited update, which includes additional Bento functionality plus a brand new animation override. This updated avatar is now available in shop, along with one completely new line – the Bicolour coat pattern!

If you already have one (or more) of either the Tabby or Cheshire avatars and purchased it off the Marketplace, you can expect an automatic delivery for each within the next twenty-four hours. A limited number of recent in-store purchases will also receive this automatic update. If you do not receive your update by Jan 17 2018 (EDT), please see below before contacting me by IM:

If you purchased in-store prior to Christmas and do not recieve an update automatically, please come to the main shop and rez your update token (found in your original Kitten package). There may be a delay but you should still get your update that way. If it times out, please contact me (Aki Shichiroji) directly by IM. 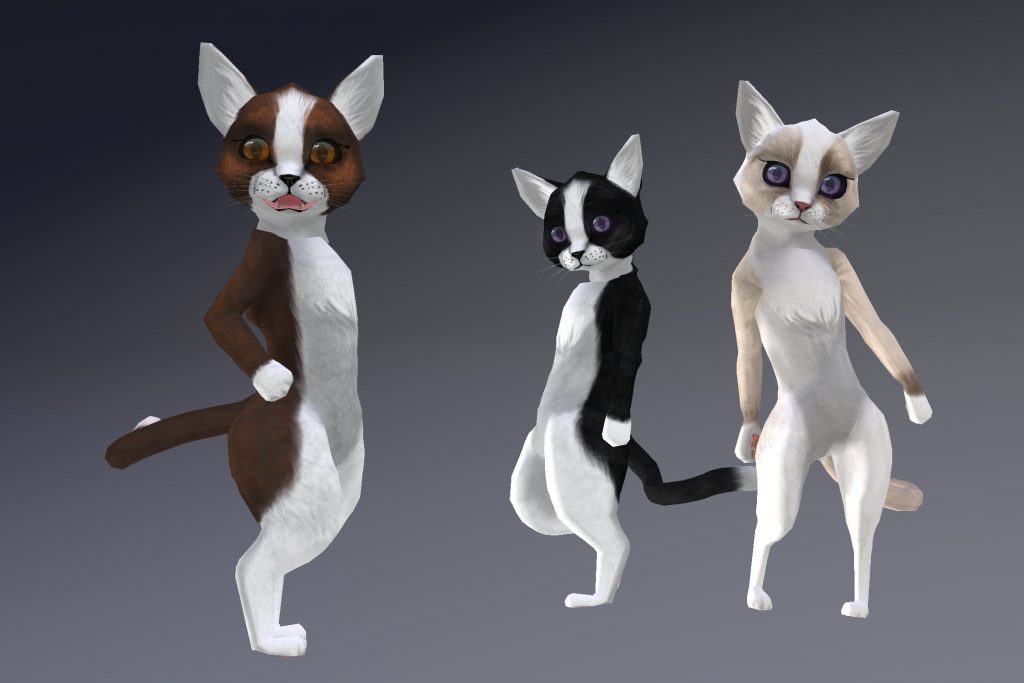 This new bicolour pattern is very much intended to reference the ‘tuxedo’ look that many bi-colour cats have. Five colours are available in this line and these new kittens will include Bento functionality, just like the updated originals!

Known issue: RFL Purple Cheshire has not been addressed in this update but will be within the week. Please stay tuned for further info.

Will dev-kits and/or clothing be made available for these avatars?
– Both are being taken in to consideration at this time and both are very likely. Again, the logistics of packaging and managing a growing number of coats for this avatar are something that I need to become accustomed to before I will have time to address either. Please IM me to let me know of your interest!

Will animesh support be provided with this avatar?
– It’s a bit early to comment, but animesh for this avatar is quite likely. In all likelihood, Animesh support will involve a customized kit that can be dropped in, but given that these details are rather abstract, the final execution may be somewhat different. There are also some non-mesh and non-rigged components which would need to be converted for use with Animesh should a conversion occur, so I would need to account for the additional time cost for this work.

Thank you for your ongoing support!

If you like what you see but don’t think it’s quite right for you, perhaps consider donating to my Patreon? Your continued support helps to produce weekly content (written, modelled, animated or otherwise) and helps to keep original content creation in Second Life! 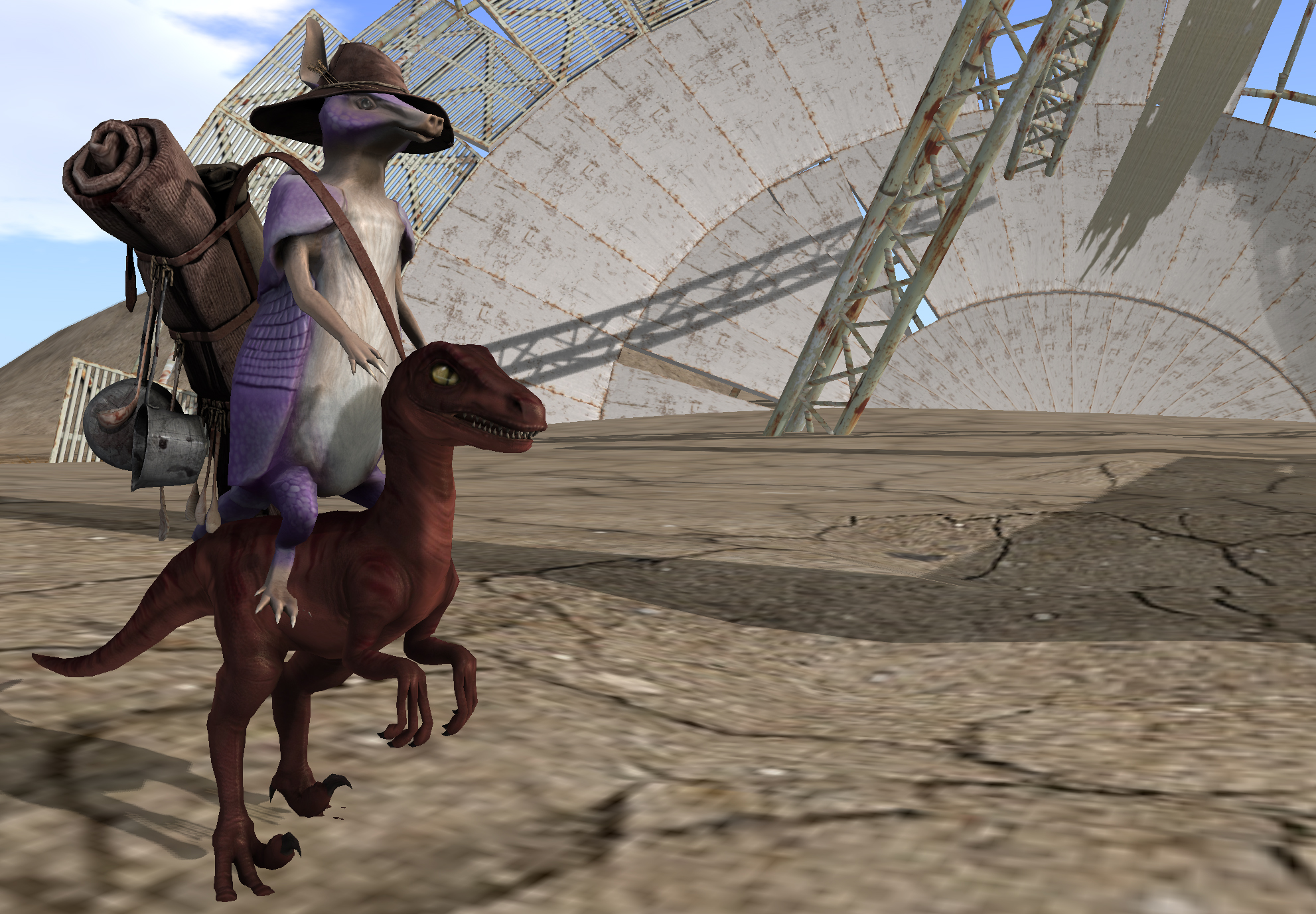 As the title suggests, Wilds of Organica makes its way back to The Arcade this March with the following avatar!

It’s .5m tall, comes with controllable eyes and tail, and also comes with both a biped and quadruped AO.

Check out the Wilds of Organica gacha machine here from March 1-March 31st, 2016! 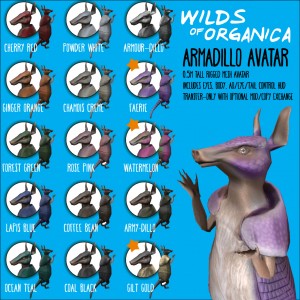