First off – thanks to all who dropped by my spot at Home Expo this past couple of weeks; Home and Garden Expo is always interesting (and sometimes stressful) to prepare for and your support definitely makes it worth the time.

This year the Expo was home to 14 sims, one which was completely dedicated to live music events and another which was home to Breedable exhibits. All of the other sims were packed full with dozens of merchants and sim sponsors were encouraged to get their fellow merchants together to make their sims unique.

I managed to get my exhibit mostly designed and ready for presentation by a couple days before, but was putting together new content for the show as late as the last day before opening. I originally decided to make a larger prefab to serve both as a display and store-space, but regrettably had overlooked the fact that my booked space was not very large. Ultimately, while I worked on the prefab until about 75% completion, it became evident that even if i were able to get it to fit, thematically it wouldn’t make sense to put a whole bunch of my stuff inside and not actually allow people to compare the rezzed item with the item on the vendor.

So a couple of days before the event I discarded the idea of finishing the prefab for Expo and decided to work out some sort of display which would take advantage of developments in Second Life since the last show; namely mesh. While the nature of terrain and estate management in SL really isn’t condusive to a lot of custom changes in terrain, I did take the chance to sink down the majority of my parcel and instead created a wholly mesh terrain covering that would take its place. By doing so, I was able not only to create shapes that would not be as detailed with normal terrain, but I was able to texture the ground of my exhibit the way I wanted, including the addition of a desert-like corner, which helped a lot with making the rocky outcrops work with the set. (I noticed one of the other regions did this on a region-wide level, making sim look more authentic compared to what normal SL terrain can do. It worked out really well!)

All in all, it worked out. There was a lot of last minute repositioning, adding, removing of stuff and there was definitely more content I wanted to fit on my parcel, but I ran out of time, space and available prims, so had to make do with what I had.

As far as the overall event, I was able to raise a significant amount for the American Cancer Society and in addition found it remained profitable but have some lingering concerns.
– At 14 regions, there are a LOT of merchants to sift through. While the sims were arranged in a figure 8 configuration, the pathways (which seemed to have been predetermined by staff and not by sim sponsors) were laid out in a grid pattern and did little to direct traffic. While this has always been the case, I did find that with the immense size of the show, the lack of linear direction made it easy to get lost.
– While none of the sims looked bad, it seems to me like a couple of sims were designed to be pretty and not necessarily optimized for shopping. This is especially important for events such as these because with an event that features rezzable content, there are already so many prim, sculpt, mesh and textural assets being sold. I found myself crashing a heck of a lot, especially in the Southern/swamp-style landscaped regions, due to the plethora of huge trees wherever I turned.
– I’m not sure I understand the need for a completely separate region for live music events when each region was also given live event space. While that region may well have been donated rather than paid for by the other merchants, it inevitably demanded the majority of the event traffic, night or day. It wasn’t uncommon to see the number of avs in the Entertainment sim completely surpass the number of avatars in all of the other merchant regions combined.
– Breedables – while I get that any sponsor might demand presence, whether relevant to an event or not, i kinda felt like the Expo jumped the shark by making Breedables a big part of the event. I don’t contest that the breedable market extends the need for suitable home and garden items, however *all* of the Breedable exhibitors were grouped together on a single region and no major association seemed obvious when viewed in the context of the larger event. If Breedables are to remain part of the event moving forward, I’d prefer to see their relevance stressed throughout the event rather than confined to a single region that battles with one other region for traffic.
– Is the event getting too big? Clearly there are a lot of skilled Home and Garden-type merchants within SL. Should the event continually grow to accommodate that growing number or should it concentrate on presenting quality work visitors will be more interested in picking up? I kind of felt like such a large event led to diminishing returns. It’s not a matter of feeling competitive; after having browsed the 14 sims several times seeking items I wanted to buy, I came away fatigued with only a handful of items.

With all that said and done, the Home and Garden Expo crew did their best to make sure merchants had what they needed to get things ready for the show. I’m thankful they were so considerate with set up times and asking many merchants (including myself) for assets to fill in unused areas. It does look like the event was a success; Team Home & Garden Expo has raised L$8,184,288 for the American Cancer Society Relay for Life so far and the publicity generated for all of the participating merchants will likely help to generate more in the coming months.

All Organica RFL items will remain available in-store for the duration of RFL, so if you missed your chance to pick up any of them, please feel free to drop by and have a look.

Organica is participating in two major events at the start of June; FaMESHed is a monthly event which showcases exclusive content from a selection of mesh creators within SL; I’m flattered that I have been considered for participation and will be offering the following item as an exclusive offering for the month of June. 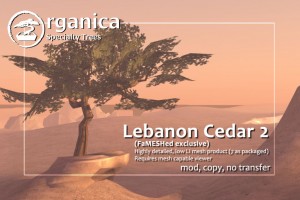 This low land impact item is offered mod/copy/no transfer and comes with detailed foliage & branch structure and a suitable rocky base. Offered exclusively at FaMESHed!

Organica is also participating in Mesh Around, which is a hunt featuring mesh content, running June 1 thru 15. 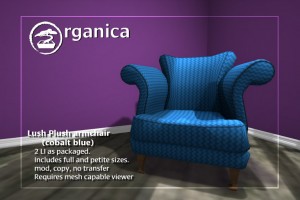 While this item is not exclusive, this will be the first and only time it is offered for free. To learn more about Mesh Around, check out their website, where you can find out more about the hunt as well as the starting location. 2LI as packaged, comes with full and petite sizes. Mod, copy, no transfer.

I’ve received some requests to make winter trees available as packs outside of their usual offering for those who wish to furnish their sims for the winter season, so I’ve made two packs available;

They are divided by foliage type – deciduous (leafy) and coniferous (needle). Each pack comes with seven trees plus frosted grass. All items are sculptie. Please note: These two packs are offered as is. No updates for items contained within these two packs will be sent out unless there is some defect. 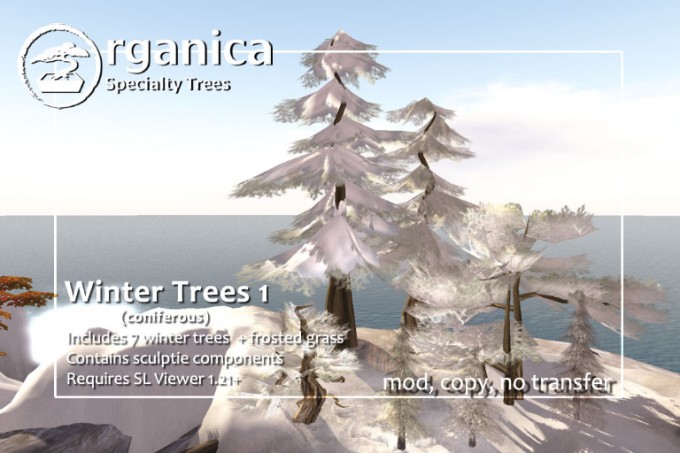 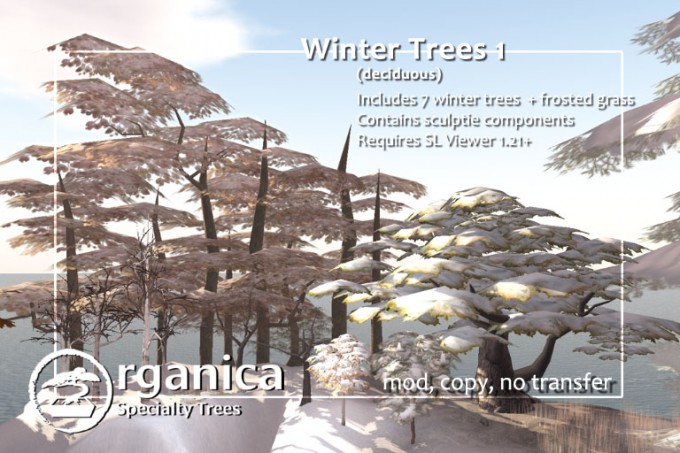 Christmas tree ornaments return to the store and will probably hang around until mid-January before they are put away for another year – they come in two varieties – star and tapered, eight colours to a box. All are mod/copy.

Check out the store for some holiday freebies as well!

Finally, a release unrelated to the upcoming holidays: 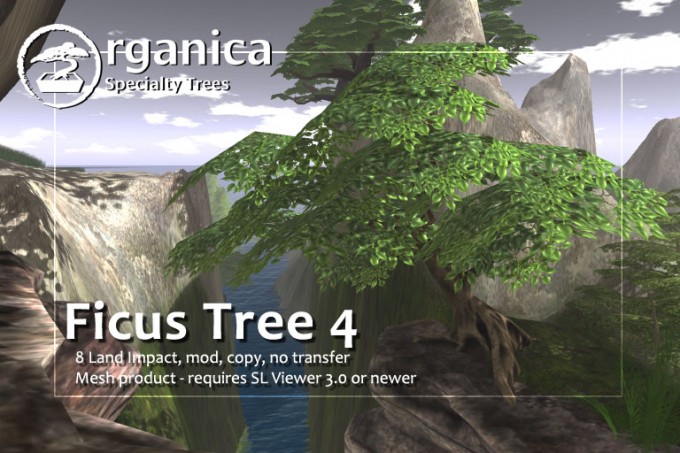 This ficus is the newest in the Ficus series and features a beautiful leaning trunk and detailed bark and foliage. This is a mesh product, so you’ll need SL Viewer 3.0 or newer. It is 8LI out of the box and is mod, copy, no transfer.  ( Buy in Store )( Buy on Marketplace )