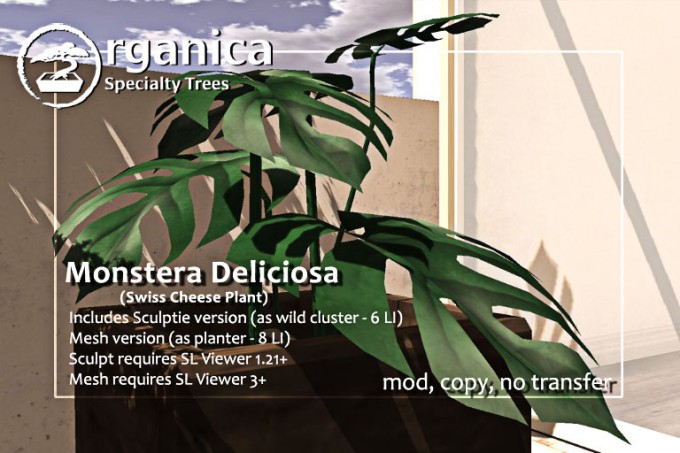 Known by many names, including ‘Swiss Cheese Plant’, ‘Split Leaf Plant’, Mexican Breadfruit, Ceriman, and even Delicious Monster (after the Latin name), Monstera Deliciosa are broad-leafed plants which in nature develop attachments to tropical trees and use them as a support to gain height. Domestically, they’re known as excellent low maintenance plants that do well in planters in homes, offices and commercial areas. Offered with a mesh version (small cluster of the plant set within a mesh planter) as well as a sculpt version (large cluster of plants, suited for outdoor use). The mesh version requires at minimum a mesh-capable SL Viewer such as V3.0+. Sculpts are viewable with SL 1.21 or newer. Offered mod, copy, no transfer. ( Buy in Store ) ( Buy on Marketplace )

When one thinks of exotic tropical flowers, it is hard to overlook the highly iconic Bird of Paradise plant. This plant is offered mesh only and takes up 8 LI out of the box.  Because it’s mesh, you’ll need a mesh-capable SL viewer such as V3.o or newer. Offered mod, copy, no transfer. ( Buy in Store) ( Buy at Marketplace ) 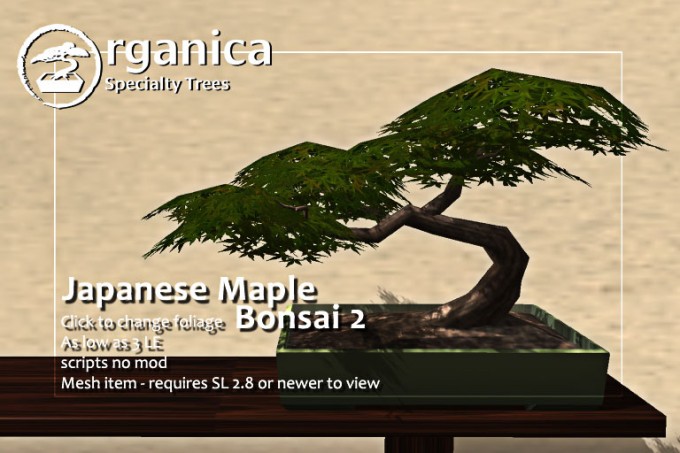 A new bonsai is now available – it features classic Japanese Maple foliage which can be switched between red and green on click. This is a mesh item – you’ll need a mesh-capable viewer to see it. Offered mod, no copy, transfer and mod, copy, no transfer. ( Buy in Store ) ( Buy at Marketplace )

Only two parcels are still available in Sylvan!

Both parcels split from the originally larger Parcel 7 are now occupied, so there are now only two parcels available in the sim. Both are quite scenic – Parcel #2 is a square shaped lot in a quiet bordered on two sides by water on the eastern half of the region and the other (parcel 9) is a generously sized L-shaped lot that faces north-west, with a full view of the waterfall.