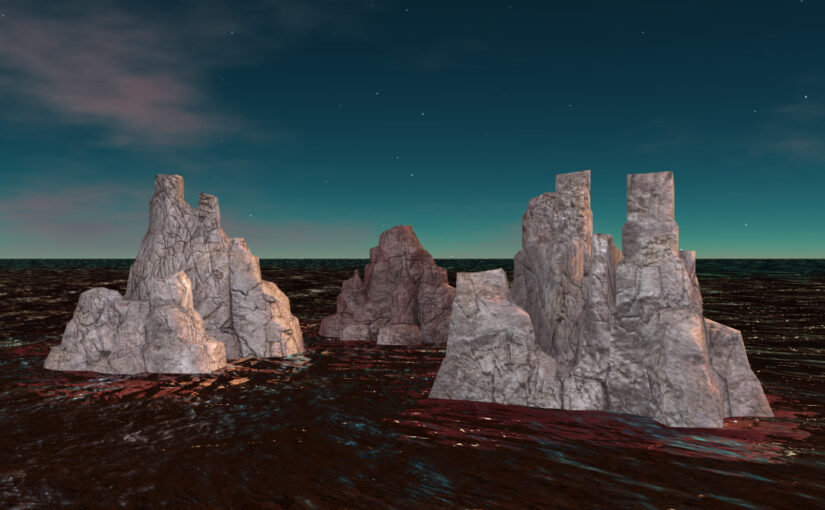 This batch of releases includes three new products fundamental to landscaping for small and large parcels.

It’s been a while since I added to the pure landscaping side of things, so I figured I would get a whole bunch put together this time around!

All of these releases are scripted for texture change, but all include non-scripted versions for those who are script-conscious.

Organica last released a selection of rocks many years ago, and while those have done well, folks have been asking for a bit more variety and resilience for use in multiple environments.

This pack includes four different textures (plain, green moss, fall moss, and snowy) for three different rock shapes. Each are available both as non-scripted, separate items, or lightly scripted for texture change, and are 1 LI at packaged size.

Prior to moving the store back down to ground level in 2018, all existing Floating Island sets had been retired. It wasn’t until recently that folks seeking out these older products encouraged me to work on some updated ones for general use.

Four textures are available for this mesh item, both separately as well as scripted. 18LI each at packaged size (~18m cubed).

These low-poly rock formations are great for off-region or mountainside use. In Organica region, you’ll see them as both, making use of vertical planes to add variety to a flat horizon or to interrupt the smooth slopes of regional terrain.

Available as separate, unscripted items OR with scripted texture change – Textures can be switched between snowy, plain, bright and dark moss. LI ranges from 35-45 at packaged size (~64m cubed).

All three of these products are now available for in-store viewing and purchase, as well as on Marketplace. ( Rocks , Islands , Granite ) 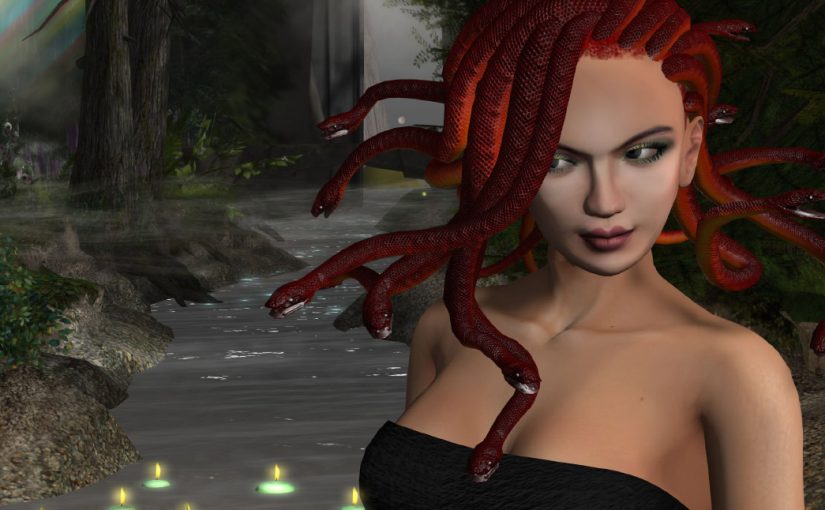 It’s been a long while since I first posted about Animesh. Apparently, it’s been a good 18 months since Linden Lab started working on it, and just this week, the new functionality hit the AGNI grid (not just on RC channels) completely. If you have not yet updated your SL viewer to 6.0.0 or higher, you may wish to do so now!

That LL announcement was the final kick in the butt I needed to finalize the look & feel as well as packaging and pricing for my new Medusa Gorgon Hair.

While I would have preferred to have released these prior to Halloween, it just didn’t work out from a scheduling and feasibility point of view. With that said, I am glad LL took their time to ensure all their ducks are in a row moving forward, and look forward to making much more content that takes advantage of the new functionality.

For full details, please be sure to try the demo and to read the documentation fully. There are some caveats relating to Animated Mesh objects which may affect the product’s utility for you. 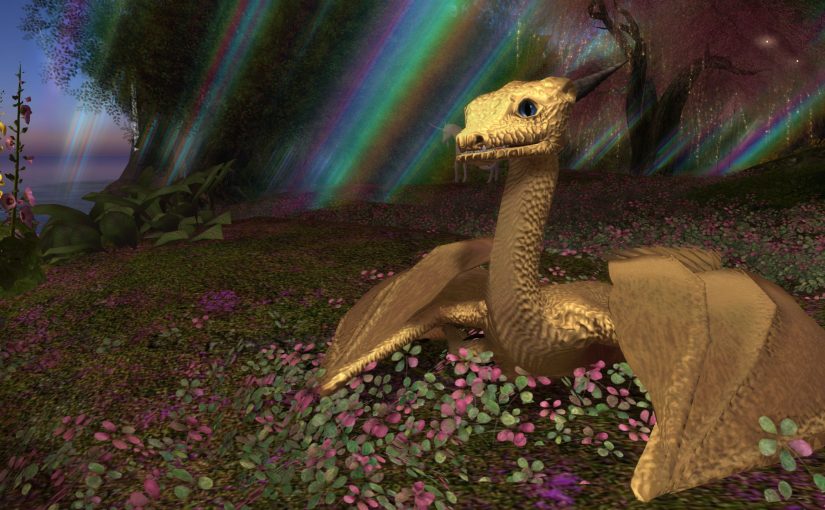 Eight wyverns are now available from Wilds of Organica. For now, available just in-world, so be sure to drop by and pick up a demo, here: http://maps.secondlife.com/secondlife/Organica/100/185/26 .

For the moment, these are fully animated avatars with some Bento support + eye control. I’ll touch on plans as follows…

Some of you may recall the wyvern having made an appearance on the original Bento video put together by Linden Lab. By that point, the main model had been completed and rigged with a preliminary Bento rig. At the time, I chose to make use of both hind and wing bones to make this a mount, rather than a full avatar, but it also meant there needed to be a few compromises when it came to any treatment of a human avatar rider.

While I am not sure I couldn’t have made it work, there were a number of factors that spurred me to abandon the mount-as-part-of-existing-rig solution.

First, I was working on a number of projects at the time and various events called for projects that just made more sense to be released first.

Second, both the underlying Bento rig and development tools have changed since I started. We started off with no wings to some wings to potentially being able to ride rigged objects eventually.

Third, the final rig implementation as it stands best accommodates a fully opening and closing webbed wing structure by using most of the hand bones, which is a lot more difficult to do with just the Bento wings.

The added difficulty of dealing with an especially thin webbed membrane and preventing as much clipping as possible has been a major bone of contention for me and I feel like the current setup strikes the best balance.

As it stands now, I hope to keep an eye on the avatar and how folks like it. As always, updates are free, and with the new vendor system, I look forward to being able to just push updates to you automatically.

I will be looking in to tangential implementation as Animesh and hope to, ultimately, also provide a means for use as an Animesh mount… but until then will be catching up on a few items for both shops along with packing up for a major life change coming up in the next month or so.

I don’t want to bore folks much about it, but I must say I will be moving at the end of October. While I’ve made good memories where I am now, I’m really looking forward to making the new place my home.

Now that the Wyvern is out of the way, I hope to delve a bit more in to upcoming Animesh releases as well as other things I’ve been meaning to work on for a while.

Look for some freaky Halloweeny stuff coming up soon, along with some new household items as well.

I am also moving things around in the Organica shop and hoping to better feature everything that is on offer. Please let me know if you think things are going in a good direction or if you have any other feedback.

Wilds of Organica has a fantastic spot this year at Fantasy Faire’s Breeze sim and there are two new releases available:

This new set of cyborg heads is rigged, Materials-optimized mesh available in eight unique looks. These are mod/copy/no transfer and each comes with a version for both male and female shapes, plus appropriate alpha layers. 100% Proceeds from the Vital Violet and Unapologetic Pink versions will go to the American Cancer Society as part of the Relay for Life. 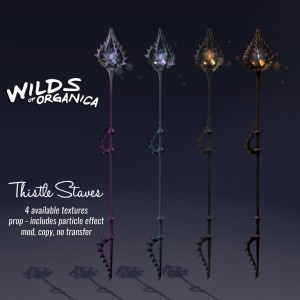 Additionally, all proceeds from this stave set will go to RFL/ACS. These staves include a slight particle effect, but are otherwise unscripted. By default, they will attach to your left hand, but since they are unrigged, you can attach them to any part of your avatar if you wish. Mod, copy, no transfer, includes 4 textures.

These and many other Wilds of Organica items will be on sale at Fantasy Faire, including many previous years’ RFL exclusive offerings!

Fantasy Faire runs from April 21 thru May 1 and Wilds of Organica can be found here.